Recording Podcasts on iPhone – From AudioBoo!

What, you aren’t AudioBoo-ing yet? You are SOOOO behind the times 🙂  Okay, not really, but AudioBoo is a pretty cool little service.

AudioBoo is an iPhone application for recording and sharing up to 3 minute audio clips with the world. You record directly from the iPhone app and it instantly uploads it to your online account and shares it with your friends. You can add titles, text, geolocation info and photos too! The files are all saved and stored online as mp3’s, hosted on AudioBoos website.

Why Should Podcasters Use It?
Podcasts come in all shapes, sizes, styles and formats. Some are hour long weekly video podcasts and some are shorter audio only shows. That is all well and good, but what do you do when you do not have time for a full show or you find yourself in a situation where you need to record and share with your audience immediately but don’t have all your equipment (like when you run into Angelina Jolie on the street and she stops to talk to you)? You AudioBoo!

Show Us Examples of How it Works!
Ok, ok. My wife (fitness podcaster @fitness, producer of the Fit Life video podcast) started testing AudioBoo as a way to give quick, easy tips to her audience. Below is an embeded version of that episode (widget provided by AudioBoo). As she finds new topics of interest she wants to get them out as fast as possible, so she just talks into her iPhone, and BAM! — AudioBoo. 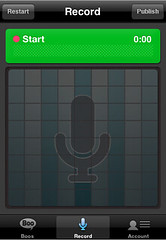 You know I wouldn’t talk about it and not show you examples, so here is the recording screen of the iPhone app. Click to their iTunes page to see all the screenshots.

Final Notes:
AudioBoo is a simple to use, no hassle, no nonsense way to record and distribute short audio comments. Think of it as twitter for audio! I think there are lots of interesting things that could come from AudioBoo, but only time will tell. I’m rooting for them!

Get the AudioBoo iPhone App Here!